For this project, our team designed the resistance structure for phases 1-4 and the design of the geotechnical works in phase 4 and also provided technical assistance services during the execution.

Urban Plaza is a residential complex comprising 21 blocks of flats and a multifunctional complex with 4 buildings, all occupying an area of 10 hectares.

The project is divided into 4 investment phases, of which the first 3 are related to the construction of the 21 blocks, and phase 4 is dedicated to the multifunctional ensemble.

Phase 1 comprises the first 7 buildings, one type A building and three each for type B and C.

Phase 3 comprises the last 6 buildings, one type A building, 3 type B buildings and 2 type C buildings.

The developed surface built for the entire phase 4 is approximately Ac = 79,457 sqm. 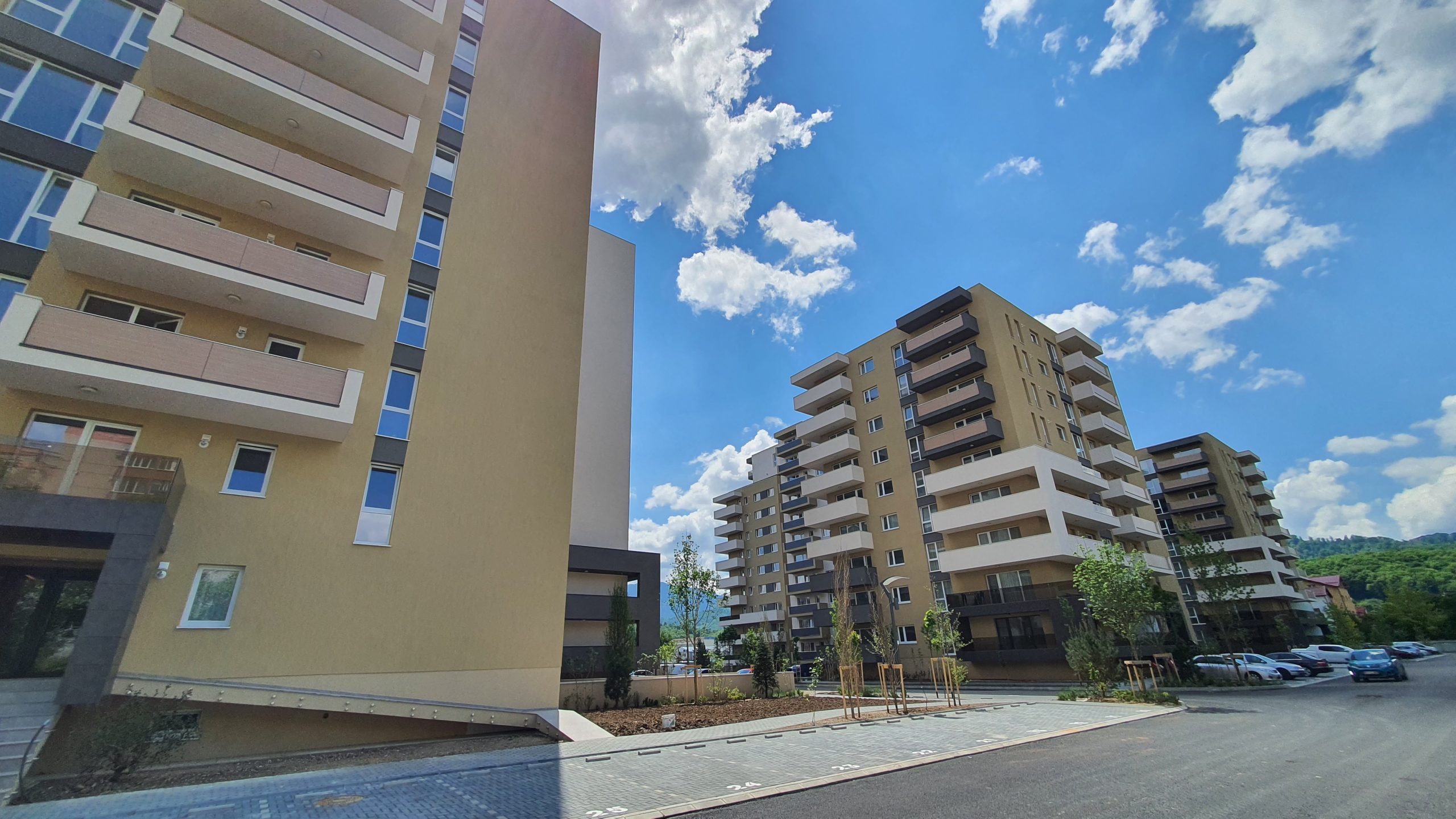 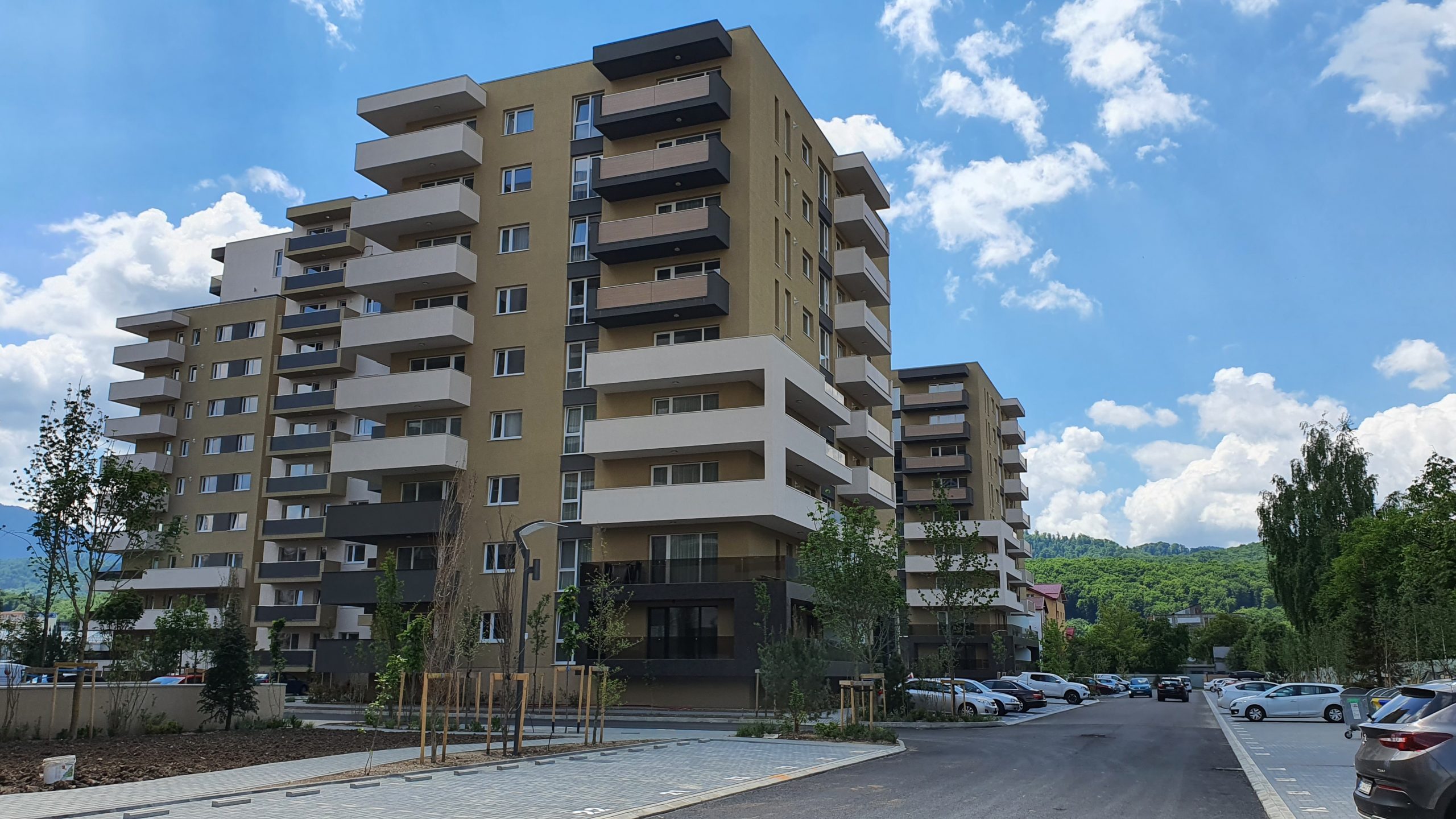 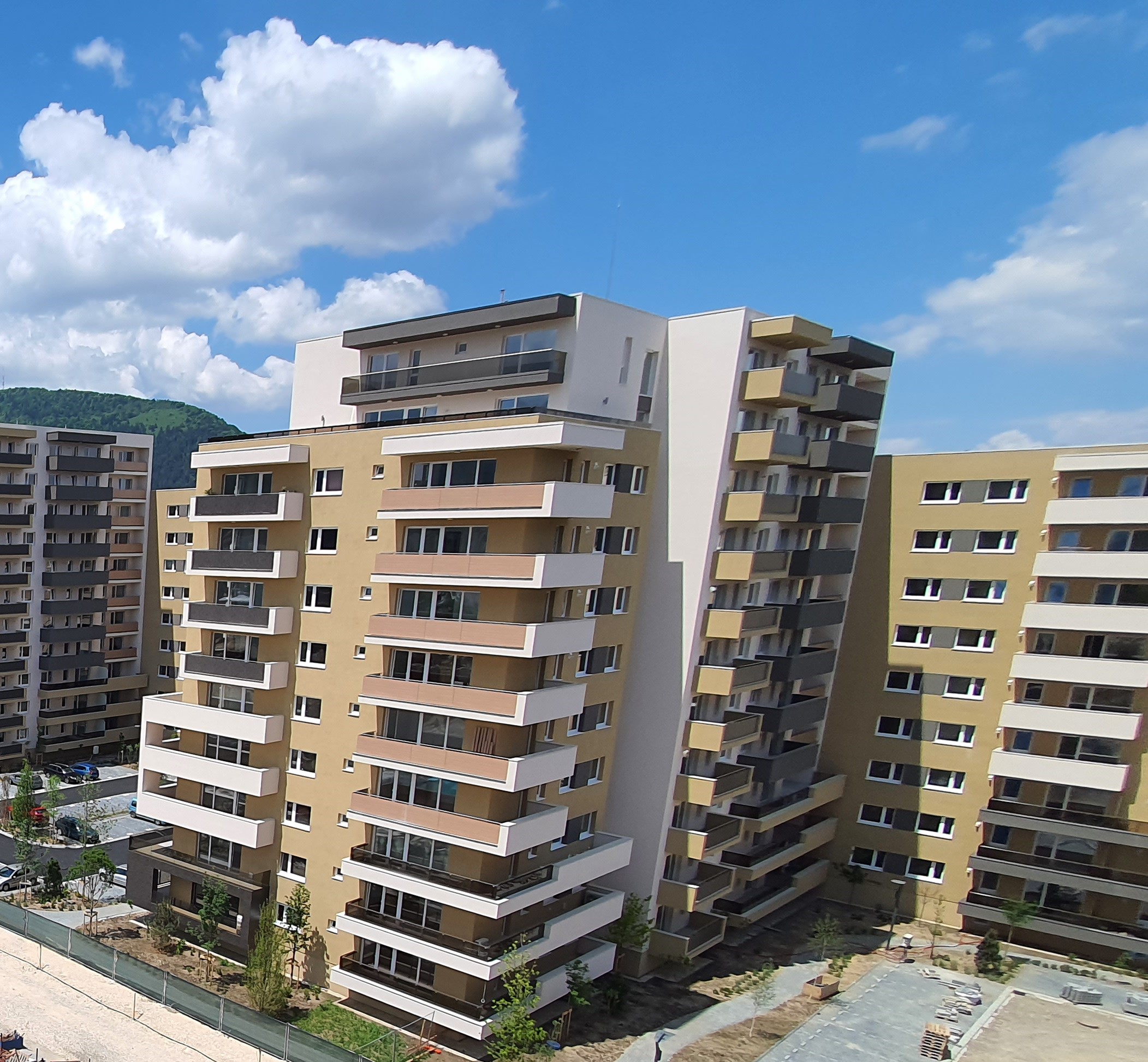 The vertical circulation is made with the help of an elevator and a ladder made in a single ramp.

The terrace above the last level is closed to traffic.

The vertical elements of the superstructure continue in the infrastructure. Additional walls are provided in the basement, on the contour of the building. The foundation system consists of reinforced concrete sole foundations arranged under the vertical resistance elements.

The vertical structural system consists of a series of reinforced concrete walls and reinforced concrete pillars. The walls are arranged in the longitudinal direction and in the transverse direction, on the facade of the building and inside it, so as to allow the obtaining of parking spaces from the basement level.

The terrace above the last level is impassable.

The vertical elements in the superstructure continue at the infrastructure level. Additional walls are provided in the basement, on the contour of the building, making a rigid box. The foundation system consists of reinforced concrete sole foundations arranged under the vertical resistance elements.

From a structural point of view, phase 4 consists of 4 distinct buildings, separated by joints (B1, A2, H3 and P4). The chosen solution is a construction system with structural concrete walls and tile-type floors with perimeter beams and in the console area of the slab for bodies B1 and H3, and slab and reinforced concrete beams in both directions for building A2. On the infrastructure floors of all the bodies, a thick slab type system and a capital with perimeter beams were chosen.

The vertical structural system consists of a series of reinforced concrete walls and reinforced concrete pillars. The walls are arranged in the longitudinal direction and in the transverse direction forming nuclei in the central area so as to allow the obtaining of parking spaces in the basement, as well as the spaces for offices on the upper floors.

The vertical circulation is made with the help of elevators and stairs made in two ramps arranged in cores.

The terrace above the 1st floor and the terraces on the upper levels are passable.

Building A2 is the building with the largest built area among all the 4 investment objectives of phase 4, on the first two floors of the superstructure the building has an extended area with multifunctional destinations, and from the 2nd floor up takes the form of a tower.

The vertical structural system of the A2 building is composed of a series of reinforced concrete walls and reinforced concrete pillars. The walls are located in the central area of the tower, forming the main system for taking over the horizontal forces and ensuring the vertical circulation by forming four elevator houses and two stairwells.

In addition to the four lifts and two stairwells mentioned above, at the lower levels where the destination is not residential, there are two additional lifts, two escalators and a reinforced concrete staircase.

The building has two terraces, the one above the 1st floor being circulating with an extensive green roof.

At the infrastructure level, the A2 building communicates with the adjacent bodies through the passage gaps and the doubling of the vertical elements in the joint area. For this reason, the Building A2 has an enclosure wall on one side. In addition to this and the vertical elements of the superstructure that will continue in the infrastructure, there are walls perpendicular to the contour, walls in the horizontal direction in the plan, respectively walls that follow the traffic area of the parking levels, but also pillars that they are mostly bulbs for new walls.

The vertical circulation is made by means of 3 reinforced concrete stairs, 4 elevators and two escalators.

The vertical structural system of the H3 building is composed of a series of reinforced concrete walls that form the central cores and have a role in taking over the horizontal loads and gravitational reinforced concrete pillars. On the first two levels, extended compared to the current floor, we find pillars of both square and rectangular cross sections. Also here, in the front part of the building, a sloping pillar develops, which then continues straight on the entire vertical of the house and has the role of support for the top of the above-ground floors.

From the 2nd floor upwards, the pillars are mostly arranged on the contour of the building to allow obtaining spaces suitable for hotel functionality.

The building has retreats in plan at the level of the last 3 floors, thus the vertical structural elements being progressively reduced and forming circulating terrace areas.

The horizontal structural system for floors consists of reinforced concrete slabs, capitals and contour reinforced concrete beams. A peculiarity of the floor above the 1st floor is the solution with post-tensioned strips necessary to make it possible to open and maintain a free height as high as possible in the area intended for the conference room. As this floor is defined by two different level elevations, forming two areas with different functionalities (terrace with extensive green roof / technical floor and residential space), the connection between the two areas is made by means of a jump beam.

The vertical circulation for the hotel areas is made with the help of 5 elevators and two stairwells made in two ramps. On the lower levels where the destination is commercial space, conference room and restaurant, there are 3 more stairwells.

The vertical structural system of the infrastructure is composed of vertical elements from the superstructure that continue to the foundations and additionally there are walls that delimit the infrastructure contour, walls perpendicular to the contour wall that allow the delimitation and creation of parking lots, walls arranged near the cores to stiffen the infrastructure , but also in the area of ramp, staircase and technical spaces.

The basement tiles are made in a slab type system with capitals. These will rest on the contour on the perimeter walls or on the perimeter beams where architecturally the circulations between the bodies of Phase 4 are arranged.

The vertical circulation is made with the help of five elevators, three stairwells made in two ramps and a car ramp.

The foundation system is represented by partial screed and continuous foundation beams under walls and pillars.

The P4 building is a construction with 2 basements and no superstructure, intended entirely for parking lots. The vertical elements of this structure are represented by pillars. Also, where the building does not adjoin buildings B1, A2 or H3, perimeter walls are provided.

The foundation system used is similar to that used for bodies B1 and H3 and consists of foundation beams arranged under the vertical resistance elements.